The Best Takeaway in Yorkshire & Humber 2017

PAX Burger in Lindley is officially Yorkshire and Humber's best takeaway they were crowned the winner of the regional final at the British Takeaway Awards,

I’ve only gone and done it again! I spoke they listened and we have a winner. last year it was all about the restaurant and takeaway Catch Seafood in West Vale near Halifax after we nominated them for the 2016 award but this year PAX Burger in Lindley is officially Yorkshire’s best takeaway.

The Gourmet burger restaurant was crowned the winner of the regional final at the British Takeaway Awards, which were held at the Savoy Hotel in London on 27th November 2017 and we were there to witness it!

The event saw 350 of the nation’s most celebrated names in takeaway come together to recognise the success of Britain’s best independent takeaway businesses as well as a few famous faces.

PAX Burger made the final following our nomination and a month-long public voting process and was judged by celebrity chef Ainsley Harriot and friend of Yorkshire Pudd former Dragon’s Den star Sarah Willingham following a mystery shopper visit as well as a written submission highlighting why the restaurant should win.

The award was presented to chef and owner Eric Paxman by northern comedian legend John Bishop.

Eric said: “We are over the moon to have won! This is a fantastic achievement which is testament to the skills and dedication of every member of the PAX team who all work so hard to deliver great food and service.

“We couldn’t have done this without the support of our loyal customers and the local community in Lindley, so we’d like to thank everyone that voted for us and who has supported us since we opened last year.

“As a young business, it’s a great feeling to know that we’re ticking the right boxes. Picking up this top title is the icing on the cake.”

As a huge PAX fan, it was an honour to celebrate with Eric a the event. The team has succeeded in bringing something new and exciting to Huddersfield, so it’s great to see that recognised in such a high profile way. 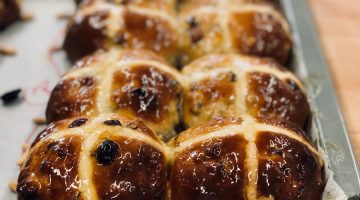 The School of Artisan Food