50 SIGNS OF BEING A FOODIE IN YORK REVEALED

A study has revealed that knowledge is king when it comes to being a true foodie in York, from knowing what wine (41%) and herbs (38%) compliment different dishes, to reading food magazines (38%) and memorising recipe books (25%). 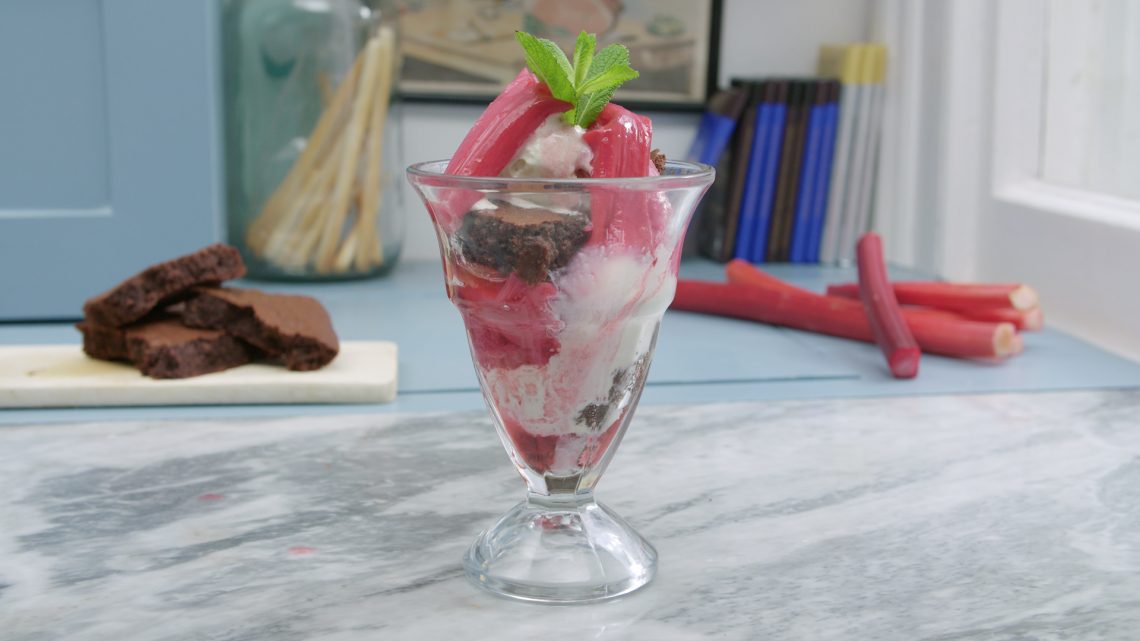 · More than three quarters (77%) of locals consider themselves to be a foodie, and over two thirds (64%) enjoy being known as one
· Knowledge is key to being a true foodie, including knowing what wine (41%) and herbs (38%) compliment different dishes
· Tour to serve up traditional ‘Yorkshire Moggie Cakes’ with a Green & Black’s twist on Friday 20th May to celebrate local recipes and foodie culture

A study has revealed that knowledge is king when it comes to being a true foodie in York, from knowing what wine (41%) and herbs (38%) compliment different dishes, to reading food magazines (38%) and memorising recipe books (25%).

The poll; commissioned by Green & Black’s Organic, revealed the top 50 foodie indicators in the city, which included enjoying new dishes at restaurants (57%) and looking forward to the weekly food shop (49%) – as opposed to seeing it as a chore.

The study also found that more than three quarters (77%) of people in York consider themselves to be a ‘foodie’. Locals’ desire to be considered a ‘foodie’ is so strong, that over two thirds (71%) think it is ‘cool’ and ‘trendy’ to be one. In fact, almost half (47%) of people in the city pride themselves on their foodie status so much, that they get annoyed when other people claim to be a foodie when they don’t know that much about food and cooking.

The poll, which surveyed 2,000 people nationwide, marks the start of Green & Black’s nationwide ‘Taste & Colour Tour’. Stopping off at Parliament Street in York on Friday 20th May, a beautiful vintage van ‘Coco’ will sample traditional ‘Yorkshire Moggie Cakes’ with a Green & Black’s twist to celebrate local recipes and foodie culture.

The delicious creation has been developed by Brandt Maybury, Taste Specialist at Green & Black’s Organic, who commented: “It seems being a ‘foodie’ in York means knowing your stuff, whether it’s following the latest foodie news to knowing what wine and herbs compliment different dishes.”

“Regardless everyone can enjoy cooking and experimenting with different ingredients, and at Green & Black’s we hope to encourage the people of York to try something a little different – you never know, this may be the start of your journey to becoming a fully-fledged foodie”.

The study also revealed that eight in 10 (83%) of people in York consider themselves to be a good cook, with the average adult getting the hang of cooking at the age of 25. Of those surveyed, a roast dinner (50%) was deemed the top meal you need to be able to rustle up before being considered a good cook, followed by a three course meal (44%) and a Christmas dinner (32%).

Before getting the hang of cooking, two fifths (39%) of people in York went to their parents’ house for a home cooked meal, while others lived off ready meals (18%) and takeaways (16%). In terms of what encouraged locals to become a better cook, almost half (46%) said it was because they become more interested in cooking. Others said that it was because they moved out of their parents’ house (36%) and started a relationship (33%). 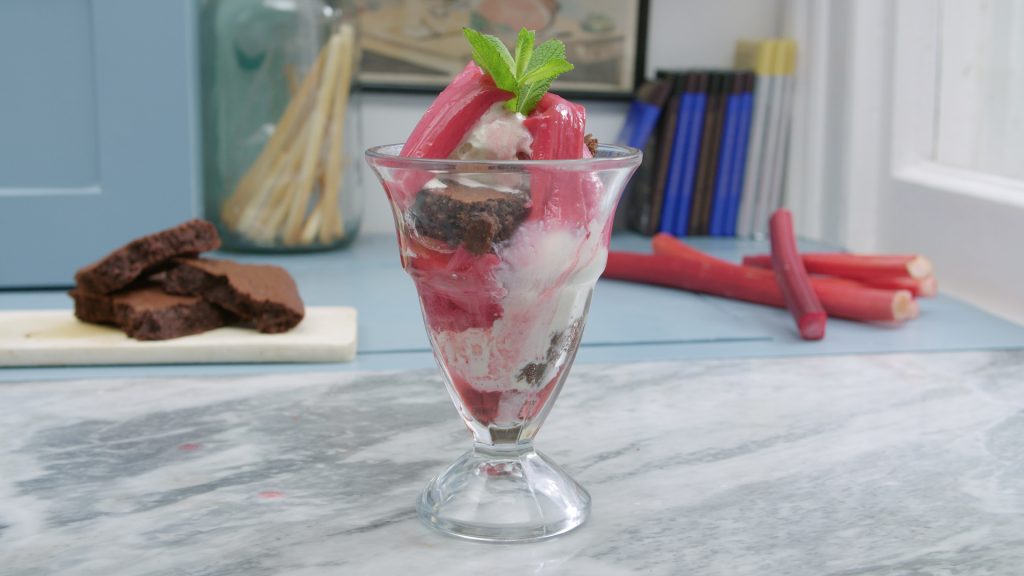 Moggy cake is a Yorkshire recipe similar to parkin, but lighter in texture and flavour. The ingredients work perfectly with our Dark 70% chocolate, and so we’ve created the Moggy brownie. To celebrate other Yorkshire foods, the sundae is topped with tart poached rhubarb, and sweet honeycomb (or cinder toffee to a true Yorkshireman).
Depending on season and variety, your rhubarb may need a sprinkle of sugar as well as the syrup from the stem ginger. If you’re not sure, make a mini batch as a tester first to check – you should still aim for plenty of acidity/tartness, as this will balance with the sweet brownie and honeycomb.

To build the sundae

Start with making the brownies. Preheat the oven to 160c, and line a 20cm x 20cm baking tin with greaseproof paper. Melt the butter in a saucepan, remove from the heat and stir in the chocolate, syrup and treacle. Mix until, smooth, set aside to cool.

Whip the eggs and sugar until pale, light and fluffy (if using a hand whisk this can take up to 10 minutes – an electric whisk is best). Pour in the chocolate mix and fold together. Add the flour, oats, and spices, mix together well and pour the mixture in to the lined tray. Bake for around 20 minutes, until the centre is just under-done and has a very slight wobble to it (a good sign of a gooey brownie!). Set aside to cool and set, ideally overnight for best results. 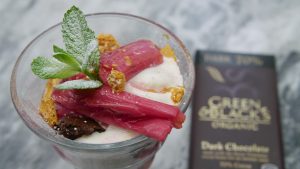 Next, make the rhubarb. Wash and cut the rhubarb in to batons and line them up in a suitable tray (the brownie tray will be ideal). Chop the stem ginger in to small sticks and scatter over the rhubarb, before finally drizzling over some of the syrup from the jar too. Cover with tin foil and bake at 160c for 10-12 minutes, until the rhubarb is just beginning to soften. Leave to cool before transferring to the fridge to chill.

For the honeycomb, prepare an area of your work surface with a sheet of greaseproof paper, and rub a few drops of vegetable oil across the surface to help prevent the final honeycomb from sticking to it. Place the sugar, golden syrup and water in a heavy-based saucepan (copper is ideal, but stainless steel is also fine) and place on a medium heat. Stir until everything is mixed together, and then leave to boil (do not stir past this point otherwise the sugar may crystallise/clump together). Have the bicarb and vanilla extract weighed out separately and ready to go. Once everything in the saucepan has started to turn in to a light caramel colour, you can start to lift the pan and very gently swirl around to make sure everything is cooking evenly, but still try not to stir at this point. You are looking for a deep, caramel colour that will take around 8 minutes to achieve, or around 170c for those of you with a thermometer. At this point turn off the heat and stir in the vanilla, then the bicarb. Continue to stir as the mixture begins to foam up to make sure everything is well mixed, and then carefully pour out on to the prepared sheet of greaseproof. Leave to cool for 30 minutes before breaking in to pieces. Store in an airtight container to prevent them becoming sticky (any leftover big pieces are particularly nice dipped in chocolate and left to set).

To serve the sundaes, remove the ice cream from the freezer and allow to soften for 10 minutes. Build your sundae by alternating layers of ice cream, brownie and rhubarb before drizzling with the rhubarb juice and sprinkling with honeycomb. Top with a sprig of mint, a dusting of icing sugar, and enjoy! 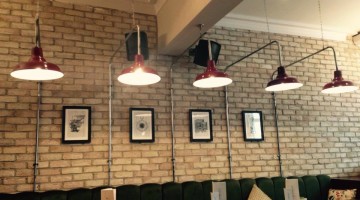