While Ryan Giggs' restaurant, George's Dining Room & Bar, might be on't other side of t'Pennines, our Chris is still a huge fan. He brings his verdict here.

Given over 500 years have passed since the last War of the Roses, I’m guessing even Richard III would forgive me for popping over to the less privileged side of the Pennines from time to time. But really it was Greater Manchester we were visiting and given the folk of this rainy county are unsure if they are Lancashirian or not, I suppose we can be forgiven for not knowing either.

Regardless of whether you forgive me or not I think it’s safe to assume that when the phone rings and it’s Ryan Giggs’ PR company asking you to review his restaurant, you simply nod your head and say YES. (I suppose at this point I need to make a confession, so here goes: I’m a Manchester United Fan, a season ticket holder who enjoys nothing more than blessing the Strafford End of Old Trafford with my presence and singing to my hearts content, including the now-famous terrace anthem that relates to a certain Vieira giving the Ryan Giggs the ball and Arsenal winning naff all).

I beg that you let  me off, I promise that everything else in my life including sport is Yorkshire through and through – just not football!

It really doesn’t matter if you’re a football fan or not. The name Ryan Giggs is instantly recognisable and 99% of the time it’s because of his glittering football career, however for 1% of people, and especially those in the Worsley area of Manchester, it’s common that it could actually be for George’s Dining Room & Bar

Located on the busy Barton Road, George’s takes its name from architect Sir George Gilbert Scott, probably the most successful and famous architect of the Victorian era, with many landmark buildings to his name, including the stunning Worsley village church, St. Marks.

Although the building that houses George’s Restaurant may not be in the same league as the buildings created by its namesake, it’s fair to say that the interior is pretty impressive. It’s chic without been over over fussy, the bar area has a feel of trendy wine bar and the restaurant area lives up to its dining room description in the name of the restaurant. There was, of course, always the possibility that a restaurant owned by a footballer had the potential to be full of WAGs and celeb wannabes drinking classy cocktails that they couldn’t really afford whilst trying to balance in ridiculously high heel shoes and adjusting their skirts that your father certainly would not approve of. I’m pleased to report that is not the case.

Instead we were greeted by a bar man who was keen to ensure I chose the best wine based on what I’m likely to eat rather than on price, and even goes out of his way to let me try his two personal favourites. Wow. Now this was great service.

We were guided to our rather smart looking table in the restaurant and presented with a menu that read perfectly. I’m guessing the head chef had a preference towards fish, meaning it was maybe a top heavy towards the ocean, nevertheless it was hard to pick. So having played ip-dip-do for five minutes and still unable to decide, I had to call in the waitress, who was more than happy to help and recommend.

To start with I opted for the CLT – a play on the famous BLT , this version is tempura soft shell crab in a brioche bun with torched baby gem lettuce and Marie Rose sauce. Sounds great doesn’t it? Unfortunately it wasn’t. The idea was there and the description had me sold, but the execution just wasn’t right. The tempura was far from light as it should have been and in fact overpowered what should have been tasty crab inside. Granted the sauce and brioche roll was great but the main event had failed to score. 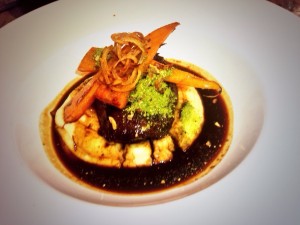 They say form is temporary whilst class is permanent, and for the rest of this experience it was class that shone through – firstly with a braised ox cheek main that blessed my side of the table, served with the most amazing clotted cream mash, roasted carrots and a rich gravy that complemented this melt-in-your-mouth dish. This was a main to die for. The cheek fell apart the minute the fork scrapped through it, it was braised to perfection and had retained a juicy feel – a 10 out of 10 experience.

For my dining partner it was a wonderfully crafted dish of salmon wellington with the most amazing hollandaise and creamed leek. The entire dish packed a perfect balance of flavour that was well thought out and crafted.

Onto dessert – I’d been seduced by the poached baby pear that was accompanied by a cinnamon ice cream which was wonderfully wintery taste despite it being an ice cold summer delight. Also on this magical plate was almond frangipane which continued to give the dessert a great match of flavours. 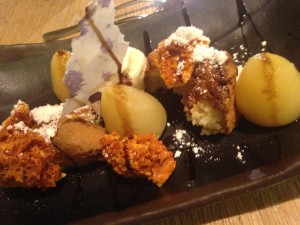 Rather naughtily I was able to convince my dining partner (my wife) to go for the well-titled Old Fashioned Wagon Wheel, which was my way of trying both desserts that had tickled my fancy. Neither of us were disappointed – a mass of hot chocolate toasted marshmallow and a wagon wheel but not as you’d seen it before – left us a smile that stretched the entire distance back to Yorkshire.

In my video review I’ve awarded George’s 8/10. They lost points on the rather disappointing starters coupled with a rather stuffy look to each of the dishes. With just a little more attention to detail George’s could easily become a 10/10 and become our favourite establishment in Manchester! 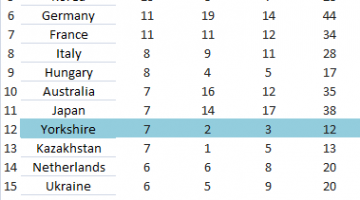