Just a Couple of Yorkshiremen aboard a Virgin Trains East Coast.

When you think of food on a train whats the first thoughts that come to mind? If it’s similar to me, you’ll be think low quality food at hight prices and in the most part you’d be absolutely right, it would however seem that Virgin Trains East Coast are doing everything they can to buck that trend. 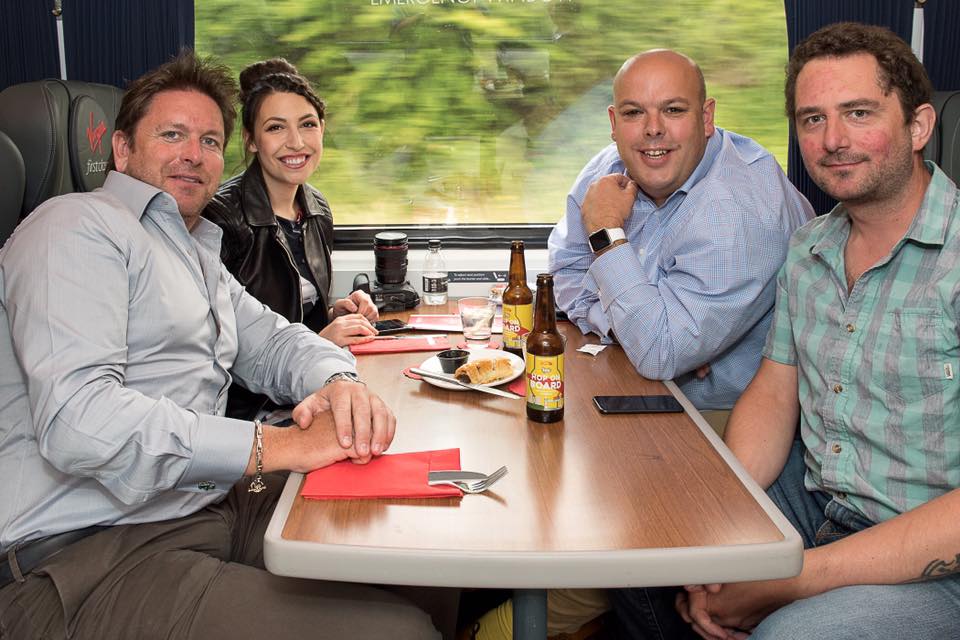 James Martin is on hand to explain the thinking behind the brand new Virgin Trains East Coast menu for 2017.

When you think of food on a train whats the first thoughts that come to mind? If it’s similar to me, you’ll be thinking low quality food at hight prices and in the most part you’d be absolutely right, it would however seem that Virgin Trains East Coast are doing everything they can to buck that trend. 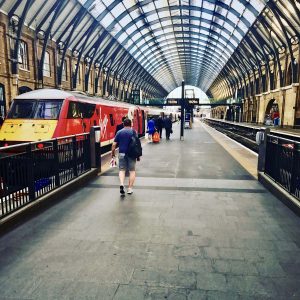 As a regular long distance commuter with a number of different train companies and sceptical as to if this could really be true, Virgin Trains East Coast invited me to spend the day with them on the East Coast line route between London and York.

In a further attempt to rid me of my initial feelings, fellow Yorkshireman, Chef, TV Presenter & the brains behind the new food offering aboard Virgin Trains East Coast, James Martin was on hand to explain the thinking behind the brand new train menu for 2017.

James is no stranger to developing food for companies responsible for getting people from A to B, his transformation for one airline has already had a major impact on satisfaction levels and no doubt profits.

But James says it’s different on a train and that’s largely down to the differing state of mind aboard a train to that onboard a plane. 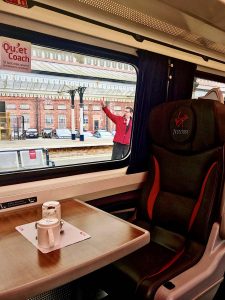 On a plane it’s more than likely you’re either traveling away on holiday, which in general means fun, or traveling back from holiday which generally means you’ve had fun.

On a train it’s different, the bulk of travellers are going to work or returning after a long day, it’s a ying and yang type of situation and that, explains James, means that a train passenger is far harder to please.

In James’s mind pleasing a train passenger may be harder, but essentially if you give them what they really want, then satisfaction should be relatively easy to achieve.

Breakfast is key, says James, its the meal that most have not had time to have at home in the quest to make the train on time, so it’s imperative that we leave a good impression.

It also just happens to be the meal that includes the most amount of pork products, so given that his mother and father used to be pig farmers in Yorkshire its also likely to be the area in which he can source the best products. 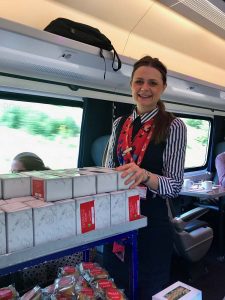 I have to admit it’s a pretty awesome breakfast, the bacon is a lot thicker than you’d expect and together with the quality of the sausage it’s clear to see that James’s experience with pigs is on display.

It is however the black pudding that really pleases me, I like a crispy outer and soft inner, and that’s delivered absolutely perfectly, James tell’s me that the secret is having the perfect balance of fat in the black pudding, it needs to be moist not greasy nor dry.

I question James about the thickness of the bacon and his answer whilst surprising, makes perfect sense.

It’s all down to wastage, he says, whilst thin bacon at first sight may be better for the purse strings, in the long run it’s more expensive due to wastage, thin bacon sticks to the baking tray which equates to the wastage, thicker bacon doesn’t and it’s certainly more pleasing to the customer. 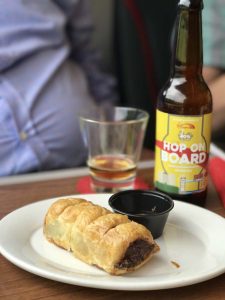 Whilst we’re on the subject of pigs we may at this point marvel is the sheer perfection of a sausage roll that blesses our table, curtesy of the 1st class waitress.

Yorkshire rare breed sausage is back again but this time wrapped in a puff pastry that clearly has a good quality of James’s favourite ingredient butter, it’s served with golden sultana brown sauce, ohh my!!

The brown sauce is up there with the best of them, Jame’s explain’s that he’s not a lover of some of the main stream brown sauces and therefore wanted to create something himself that complimented the beauty of the rare breed sausage roll.

It’s whilst we’re on the subject of sausage rolls that James again reiterates that it’s all about delivering to the customer what they really want to eat, I couldn’t agree more, but what does it take to deliver this quality of food to the train passengers? 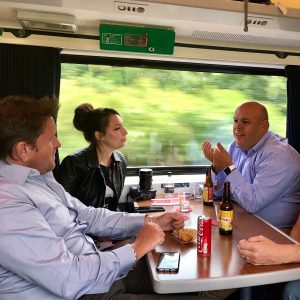 We make one to begin with, says James, and then upscale from there, next it’ll be 20 and then 200 and so on, it begin’s in my development kitchen at home before we take it to Virgin Trains East Coast and start to replicate it in their test kitchens.

We focus on taste & how it will be presented to the consumer and if something isn’t right we start again, it’s imperative that when we scale things up it still works, we’ve made mistakes but we’ve learnt from them, we don’t take shortcuts, quality is key.

Away from the cooked products what pleases me the most is the array of products available to all passengers, James & Virgin have worked hard to source local products from local  producers, one such example being The Hop on Board Ale from Rudgate Brewery, a really great beer.

We finish our conversation in the same way we did last time myself and James met, which is by talking shoes, we were in a rather muddy field the last time we spoke, and to say my completely unsuitable trainers had taken a battering is an absolute understatement, James humoured me by pointing out that I needed new shoes.

Since then I’ve entered the world of Loake and whilst James is clearly impressed that I took his advice  I think I have work to do! RM Williams and Loro Piana need to be on my shopping list apparently!!! I best get saving!

Virgin Trains East Coast operates the train franchise on the East Coast Main Line between London, Yorkshire, the North East and Scotland, to find out more visit their website at www.VirginTrainsEastCoast.com 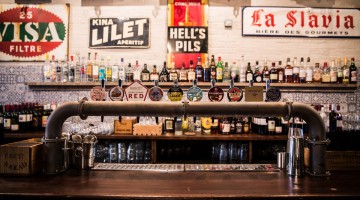